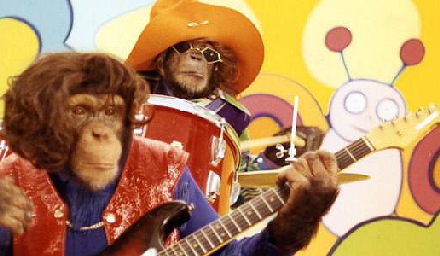 Why don't chimpanzees, our closest primate cousins, have musical ability? Scientists at örebro University in Sweden hypothesize that our musical ability developed only after we had begun to walk upright.

Writing in the journal Animal Cognition, researcher Matz Larsson suggests that our musicality stems from the need to deal with the disturbing sounds that are created in connection with locomotion. These sounds can affect our hearing when we move, while synchronized group movement, he explains, makes it possible to better perceive sounds from our surroundings.

"When several people with legs of roughly the same length move together, we tend to unconsciously move in rhythm. When our footsteps occur simultaneously, a brief interval of silence occurs. In the middle of each stride we can hear our surroundings better. It becomes easier to hear a pursuer, and perhaps easier to conduct a conversation as well," Larsson contends.

In our primate relatives, however, movement in the treetops is unpredictable and irregular in the varied vegetation. Apes do not move in a particularly regular fashion on the ground either. "When humans made the transition to walking on two legs, the sounds of their movements became significantly more predictable, making it possible for them to listen to nature better and thereby increase their chances of survival," Larsson says.

He suggests our ancestors' rhythmic behavior then became an evolutionary selection pressure. "A behavior that has survival value tends to produce dopamine, the [brain's] reward molecule."

In dangerous terrain, he argues, this would be an incentive to travel with rhythmic movements that enabled enhanced listening.

"If that kind of synchronized behaviour was rewarding in dangerous environments it may also have been rewarding for the brain in relative safety, resulting in activities such as hand-clapping, foot-stamping and yelping around the campfire. From there it is just a short step to dance and rhythm. The hormone dopamine flows when we listen to music," Larsson concludes.

Related:
Discuss this article in our forum
Hoarding may have led to human bipedalism
Pop music created using natural selection and crowdsourcing
Early Humans And Chimps Much More Than Just Good Friends
Was The Missing Link A Tripping Chimp?