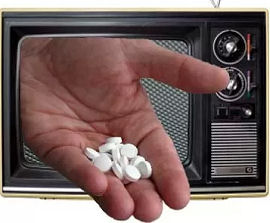 Analyzing several years’ worth of pharmaceutical advertisements, researchers found that 6 out-of 10 claims in prescription drug ads on television were misleading or false and over-the-counter drug ads were even less reliable. The analysis, appearing in the Journal of General Internal Medicine, found that potentially misleading claims are prevalent throughout consumer-targeted drug advertisements on television.

Content for the analysis came from the Vanderbilt TV News Archive, an indexed archive of recordings of the nightly news broadcasts (the news and commercial segments) on ABC, CBS, and NBC. The researchers reviewed 168 TV advertisements for prescription and over-the-counter drugs aired between 2008 and 2010, and identified statements that were strongly emphasized in the ad. A team of trained analysts then classified those claims as being truthful, potentially misleading or false.

Related:
Discuss this article in our forum
Flushed pharmaceuticals fueling fearless fish
Sex, Lies and Pharmaceuticals
Psychiatrists put themselves on the couch