You are here: Home › Health › Diet › News › Cholesterol metabolism implicated in anorexia
By Will Parker on September 10, 2013 in Diet, News 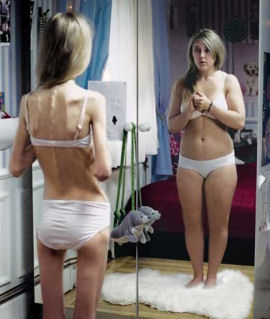 A DNA-sequencing study of anorexia nervosa sufferers has linked the eating disorder to variants in a gene that regulates cholesterol metabolism, suggesting that anorexia could be caused in part by a disruption in the normal processing of cholesterol. “These findings point in a direction that probably no one would have considered taking before,” said lead researcher Nicholas J. Schork, at The Scripps Research Institute. Schork’s findings are detailed in the journal Molecular Psychiatry.

Exactly what those genetic factors are has remained a mystery. Gene-association studies of anorexics have to date produced few replicable findings. Researchers suspect that many genes can contribute to the disorder – and thus only large studies will have the statistical power to detect those individual genetic influences.

In this new research – the largest-ever sequencing study of anorexia – Schork worked with an international team of collaborators representing more than two dozen research institutions. The project made use of genetic information from more than 1,200 anorexia patients and nearly 2,000 non-anorexic control subjects.

For an initial “discovery” study in 334 subjects, the researchers catalogued the variants of a large set of genes that had already been linked to feeding behavior or had been flagged in previous anorexia studies. Of more than 150 candidate genes, only a handful showed statistical signs of a linkage with anorexia in this group of subjects.

One of the strongest signs came from the gene EPHX2, which codes for epoxide hydrolase 2 – an enzyme known to regulate cholesterol metabolism. “When we saw that, we thought that we might be onto something, because nobody else had reported this gene as having a pronounced role in anorexia,” said Schork.

The team followed up with several replication studies, each using a different cohort of anorexia patients and controls, as well as different genetic analysis methods. The researchers continued to find evidence that certain variants of EPHX2 occur more frequently in people with anorexia.

To help make sense of the findings, the team looked at existing data from a large-scale, long-term heart disease study and determined that a subset of the implicated EPHX2 variants have the effect of altering the normal relationship between weight gain and cholesterol levels.

“We thought that with further studies this EPHX2 finding might go away, or appear less compelling, but we just kept finding evidence to suggest that it plays a role in anorexia,” said Schork.

It isn’t yet clear how EPHX2 variants that cause an abnormal metabolism of cholesterol would help trigger or maintain anorexia. But Schork noted that people with anorexia often have remarkably high cholesterol levels in their blood, despite being severely malnourished. Moreover, there have been suggestions from other studies that weight loss in certain individuals can lead to increases in cholesterol levels. At the same time, there is evidence that cholesterol, particularly in the brain, has a positive association with mood. Schork speculates that some anorexics may feel an improved mood, via higher cholesterol, by not eating.

“The hypothesis would be that in some anorexics the normal metabolism of cholesterol is disrupted, which could influence their mood as well as their ability to survive despite severe caloric restriction,” he concluded.

Ink in Water : An Illustrated Memoir or, How I Kicked Anorexia's