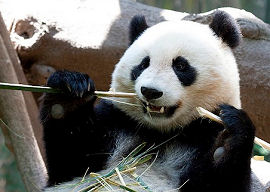 The use of non-edible corn stalks, corn cobs, and other plant material would be preferable, but these require special processing to breakdown their tough cellulose fibers. Currently, the only way to process these plant materials is with heat and high pressure or acids - both of which are costly and environmentally unsound. Now, however, Memphis Zoo's giant pandas Ya Ya and Le Le may offer a better solution.

"The giant pandas are contributing their feces," explained Ashli Brown, a biochemist at Mississippi State University who heads the research. "We have discovered microbes in panda feces might actually be a solution to the search for sustainable new sources of energy. It's amazing that here we have an endangered species that's almost gone from the planet, yet there's still so much we have yet to learn from it."

To improve biofuel production, Brown and her co-researchers are searching panda poop for bacteria that can breakdown the tough lignocellulose fibers in plant waste. She explained that pandas readily digest a diet of bamboo and also have a short digestive tract that requires bacteria with unusually potent enzymes. "The time from eating to defecation is comparatively short in the panda, so their microbes have to be very efficient to get nutritional value out of the bamboo," she notes. "And efficiency is key when it comes to biofuel production - that's why we focused on the microbes in the giant panda."

Presenting her work at the 246th National Meeting & Exposition of the American Chemical Society, Brown said her team has found more than 40 microbes living in the guts of the giant pandas. In addition to identifying bacteria that break down lignocellulose into simple sugars, the researchers also found bacteria that can take those sugars and transform them into oils and fats - which could be used for biodiesel production. Brown said that either the bacteria themselves or the enzymes in the bacteria could be used in the production of biofuels.

"These studies also help us learn more about this endangered animal's digestive system and the microbes that live in it," said Brown. "Understanding the relationships between the microbes and the pandas, as well as how they get their energy and nutrition, is extremely important... as fewer than 2,500 giant pandas are left in the wild and only 200 are in captivity." Brown's future plans include expanding the work to include samples from red pandas at the Memphis Zoo, which also eat bamboo.