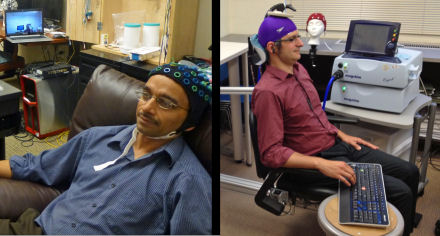 To deliver the signal to the recipient, transcranial magnetic stimulation (TMS) was used. TMS is a non-invasive way of stimulating the brain to elicit a response. Its effect depends on where the scalp coil is placed; in this case, it was placed directly over the brain region that controls a person's right hand. By activating these neurons, the stimulation convinced the brain that it needed to move the right hand. 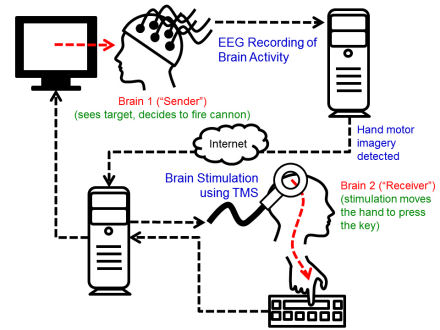 For the demonstration, Rao looked at a computer screen and played a simple video game with his mind. When he was supposed to fire a cannon at a target, he imagined moving his right hand (without actually move his hand), causing a cursor to hit the "fire" button. Almost instantaneously, Stocco, who was wearing noise-canceling earbuds and not looking at a computer screen, involuntarily moved his right index finger to push the space bar on the keyboard in front of him, as if firing the cannon.

"It was both exciting and eerie to watch an imagined action from my brain get translated into actual action by another brain," Rao said. "This was basically a one-way flow of information from my brain to his. The next step is having a more equitable two-way conversation directly between the two brains."

Rao stressed the technology only reads certain kinds of simple brain signals, not a person's thoughts. "I think some people will be unnerved by this because they will overestimate the technology," Prat added. "There's no possible way the technology that we have could be used on a person unknowingly or without their willing participation."

The researchers next plan to conduct an experiment that would transmit more complex information from one brain to the other. Stocco said years from now the technology could be used, for example, by someone on the ground to help a flight attendant or passenger land an airplane if the pilot becomes incapacitated. Or a person with disabilities could communicate his or her wish, say, for food or water. The brain signals from one person to another would work even if they didn't speak the same language.