You are here: Home › Medicine › News › Blood test could identify those at risk of suicide
By Will Parker on August 20, 2013 in Medicine, News 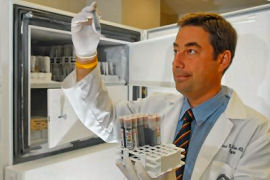 Indiana University researchers say they have found a series of RNA biomarkers in blood that may help identify who is at risk for committing suicide. Reporting their findings in the journalMolecular Psychiatry, the researchers said the biomarkers were found at significantly higher levels in the blood of both suicidal bipolar disorder patients as well in a group of people who had committed suicide.

The results, say the research team, provide a first “proof of principle” for a test that could provide an early warning of somebody being at higher risk for an impulsive suicide act. “Suicide is a big problem in psychiatry. It’s a big problem in the civilian realm, it’s a big problem in the military realm and there are no objective markers,” said lead researcher Alexander B. Niculescu (pictured). “We need better ways to identify, intervene and prevent these tragic cases.”

Identifying the biomarkers involved following a large group of bipolar patients, compiling interviews, and taking blood samples every three to six months. The researchers conducted a variety of analyses of the blood of a subset of participants who reported a dramatic shift from no suicidal thoughts to strong suicidal ideation. They identified differences in gene expression between the “low” and “high” states of suicidal thoughts and subjected those findings to a system of genetic and genomic analysis.

The researchers found that the marker SAT1 and a series of other markers provided the strongest biological “signal” associated with suicidal thoughts.

To validate their findings, the researchers worked with the coroner’s office and analyzed blood samples from suicide victims. Finally, the researchers analyzed blood test results from two additional groups of patients and found that high blood levels of the biomarkers were correlated with future suicide-related hospitalizations, as well as hospitalizations that had occurred before the blood tests. “This suggests that these markers reflect more than just a current state of high risk, but could be trait markers that correlate with long term risk,” said Niculescu.

Although confident in the biomarkers validity, the study notes that a limitation is that the research subjects were all male. “There could be gender differences,” Niculescu said. In addition to extending the research to females to see if the same or other markers come into play, the team want to conduct research among other groups, such as persons who have less impulsive, more deliberate and planned subtypes of suicide.