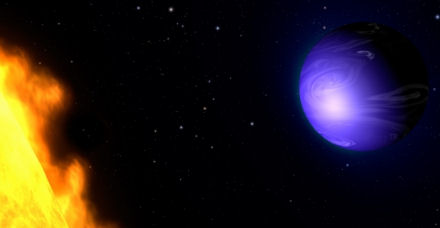 Astronomers making visible-light observations with the Hubble Space Telescope have deduced the actual color of a planet orbiting another star 63 light-years away. This turbulent alien world is one of the nearest exoplanets to Earth that can be seen crossing the face of its star. Known as HD 189733b, the planet is a deep cobalt blue, reminiscent of Earth’s color as seen from space.

But that’s where the similarities end, as this blue planet is a huge gas giant orbiting very close to its host star. The planet’s atmosphere is scorching, say the astronomers, with temperatures of over 2,000 degrees Fahrenheit and howling 4,500 mph winds. The blue color, they speculate, is likely from a driving rain made up of glass particles.

HD 189733b is only 2.9 million miles from its parent star, so close that it is gravitationally locked (one side always faces the star and the other side is always dark). The astronomers believe this would cause the fierce winds that roar from the day side to the night side.

HD 189733b has been intensively studied by Hubble, Spitzer, and other telescopes, and its atmosphere has been found to be dramatically changeable and exotic, with hazes and violent flares. These earlier observations had reported evidence for a scattering of blue light on the planet. The latest observations from Hubble’s Imaging Spectrograph confirm this earlier evidence.

The scientists behind the new observations say the cobalt blue color likely comes from high clouds laced with silicate particles. Silicates condensing in the heat could form very small drops of glass that scatter blue light more than red light, they suggest.

“It’s difficult to know exactly what causes the color of a planet’s atmosphere, even for planets in the Solar System,” says Frederic Pont of the University of Exeter (UK) and leader of the Hubble observing program. “But these new observations add another piece to the puzzle over the nature and atmosphere of HD 189733b. We are slowly painting a more complete picture of this exotic planet.”

Related:
Discuss this article in our forum
Nearby star may have 3 habitable planets
Earth-like planets may be closer than previously thought
Earth-sized planet found nearby in Alpha Centauri system
New technique for finding distant planets makes its first discovery