Choir's hearts beat as one 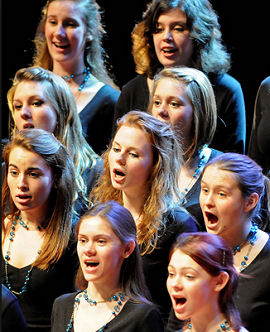 Swedish researchers studying how music affects the human body have found that when people sing in a choir their heartbeats become synchronized and their pulses increase and decrease in unison. Until now, choral singing's effects on health have not been the subject of detailed investigation. The researchers, from the University of Gothenburg, believe their research could eventually be applied in rehabilitation and preventive care.

For the study, the researchers worked with a choir performing three different choral exercises: monotone humming, singing the well-known Swedish hymn "Hðrlig ðr Jorden" (Lovely is the Earth) as well as the chanting of a slow mantra. The heart rhythm of the choir members was monitored as they performed.

The researchers found that the music's melody and structure had a direct synchronizing effect on the cardiac activity of each choir member. "Singing regulates activity in the so-called vagus nerve which is involved in our emotional life and our communication with others and which, for example, affects our vocal timbre. Songs with long phrases achieve the same effect as breathing exercises in yoga," said researcher Björn Vickhoff, lead author of the study.

He believes that the health effects arise through the singing "imposing" a calm and regular breathing pattern which has a dramatic effect on heart rate variability - something that, in its turn, is assumed to have a favorable effect on health.

"Our hypothesis is that song is a form of regular, controlled breathing, since breathing out exhaling occurs on the song phrases and breathing in inhaling between these," Vickhoff explained. "We already know that choral singing synchronizes the singers' muscular movements and neural activities in large parts of the body. Now we also know that this applies to the heart, to a large extent."

Vickhoff now wants to investigate whether the biological synchronizing of the choral singers also creates a shared mental state which could be used as a method for strengthening the ability to collaborate. "Research shows that synchronized rites contribute to group solidarity. We are now considering testing choral singing as a means of strengthening working relationships in schools," he said.