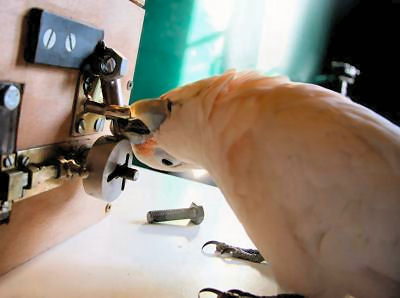 The scientists, from Oxford University, the University of Vienna, and the Max Planck Institute, report on their experiments with Goffin's cockatoos (Cacatua goffini) in the journal PLOS ONE. The same research group previously reported on experiments that showed the Goffin's to be skilled at tool use and innovation.

The researchers noted that the birds worked determinedly to sort one obstacle after another even though they were only rewarded with the nut once they had solved all five devices. They suggest that the birds seemed to progress as if they employed a "cognitive ratchet" process: once they discovered how to solve one lock they rarely had any difficulties with the same device again. This is important, the scientists say, as it is consistent with the birds having a representation of the goal they were after.

After the cockatoos mastered the entire sequence, the researchers investigated whether the birds had learnt how to repeat a sequence of actions or instead responded to the effect of each lock. "After they had solved the initial problem, we confronted six subjects with so-called 'transfer tasks' in which some locks were re-ordered, removed, or made non-functional. Statistical analysis showed that they reacted to the changes with immediate sensitivity to the novel situation," said Goffin boffin Alice Auersperg, who led the study at the University of Vienna.

"The birds' sudden and often errorless improvement and response to changes indicates pronounced behavioral plasticity and practical memory. We believe that they are aided by species characteristics such as intense curiosity, tactile exploration techniques and persistence: cockatoos explore surrounding objects with their bill, tongue and feet. A purely visual explorer may have never detected that they could move the locks," noted co-researcher Auguste von Bayern, from Oxford University.