You are here: Home › Mind and Brain › News › Eyes used to measure pleasure response
By Will Parker on June 24, 2013 in Mind and Brain, News 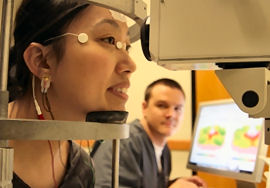 The brain’s pleasure response to tasting food can be accurately measured through the eyes using a common, low-cost ophthalmological tool, say Drexel University researchers who believe the method could be used by both food scientists and clinicians. Study leader Jennifer Nasser details the use of electroretinography (ERG) to measure dopamine levels in the retina in the current issue of the journal Obesity.

It’s long been known that dopamine is associated with a variety of pleasure-related effects in the brain, including the expectation of reward. Less well known is that in the eye’s retina, dopamine is released when the optical nerve activates in response to light exposure.

Nasser found that electrical signals in the retina spiked high in response to a flash of light when a food stimulus (a small piece of chocolate brownie) was placed in participants’ mouths. Impressively, the increase was as great as that seen when participants had received the stimulant drug methylphenidate to induce a strong dopamine response. These responses in the presence of food and drug stimuli were each significantly greater than the response to light when participants ingested a control substance.