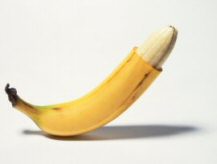 Past studies have shown that circumcision reduces female-to-male HIV transmission, among other benefits. This new study suggests a possible mechanism for HIV protection - the shift in the number and type of bacteria living on the penis.

For the study, the research team worked with 156 men in Rakai, Uganda - part of the world's largest randomized-controlled trial on male circumcision. The researchers found that men who were circumcised as part of the study had 33 percent less bacteria on their penis than those who remained uncircumcised one year after the study began. The researchers showed that the decrease was primarily found in 12 types of bacteria, most of which were intolerant to oxygen (anaerobic).

"There was a dramatic and significant change in the penis microbiome as a result of male circumcision," said Dr. Lance Price, who led the study. "At the beginning, the microbiota of both groups of men were comparable. One year after their operation the bacterial load in all men had declined somewhat, but in circumcised men the decline was significantly greater than in the uncircumcised controls. And nearly all the bacterial groups that declined were strict anaerobes or facultative anaerobes. Overall, these changes amount to a reduced biodiversity in the microbiota."

Price explained that in heterosexual transmission of HIV, the virus on the foreskin needs to reach its target cells, the CD4 T-cells, which reside primarily in the blood and the lymph nodes. He hypothesizes that penis bacteria may facilitate this process in two ways: by both recruiting more HIV target cells to the foreskin and by triggering another set of immune cells, the Langerhans cells, to deliver the virus to susceptible T-cells. Without this trigger, the Langerhans cells will simply destroy the virus. "We think that these dramatic changes in the penis microbiome may explain, at least in part, why male circumcision is protective," said Price.

"From an ecological perspective, our study shows how phenomena from the macro-world actually scale to the micro level. When you change a macro environment, such as clear cutting a forest, you affect the animals that live there. That's intuitive. Here we show that changing the penis environment affects the microbes that live there as well," added co-researcher Dr. Cindy Liu.