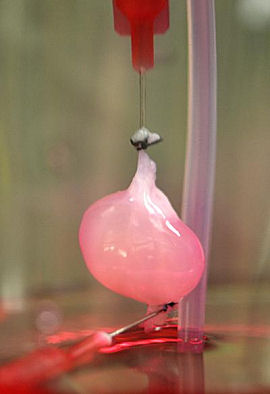 The new technique involves stripping the living cells from a donor organ with a detergent solution and then repopulating the collagen scaffold that remains with the appropriate cell type - in this instance human endothelial cells to replace the lining of the vascular system and kidney cells from newborn rats. The research team first decellularized rat kidneys to confirm that the organ's complex structures would be preserved. They also showed the technique worked on a larger scale by stripping cells from pig and human kidneys.

"Further refinement of the cell types used for seeding and additional maturation in culture may allow us to achieve a more functional organ," says Harald Ott, who led the work at the hospital's Center for Regenerative Medicine. "Based on this initial proof of principle, we hope that bioengineered kidneys will someday be able to fully replace kidney function just as donor kidneys do. In an ideal world, such grafts could be produced 'on demand" from a patient's own cells, helping us overcome both the organ shortage and the need for chronic immunosuppression."