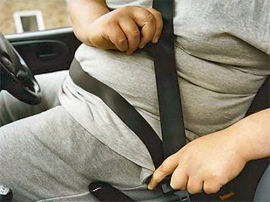 An analysis of traffic collision fatalities showing that obese drivers are far more likely to die than drivers of normal weight has prompted researchers to suggest that car designs might need to change to better protect obese drivers.

The researchers, from the University of California and University of West Virginia used data from the US Fatality Analysis Reporting System (FARS) for 1996 to 2008. The study, published in theEmergency Medicine Journal, examined 57,491 road traffic collisions and fatalities arising within 30 days of the collision.

The researchers looked specifically for collisions in which two passenger vehicles were involved of similar size and type. They selected 3,403 pairs of drivers for whom data on weight, age, seat belt use and airbag deployment were available. Around half of the drivers were of normal weight; 30 percent were overweight and 18 percent were obese.

The analysis showed that the risk of death increased the more obese the driver was. According to World Health Organization classifications (categorizing obesity from levels I to III):

The researchers note that when broken down by gender, obese women were at even greater risk. At level I they were 36 percent more likely to die and at level III they were almost twice as likely to die.

“It may be the case that passenger vehicles are well designed to protect normal weight vehicle occupants but are deficient in protecting overweight or obese occupants,” say the researchers. They cite other research, showing that the lower body of obese drivers is propelled further forward on impact before the seatbelt engages the pelvis, because of the additional soft tissue which prevents the belt from fitting snugly, while the upper body is held back.

Car design may need to change, they suggest. “The ability of passenger vehicles to protect overweight or obese occupants may have increasingly important public health implications, given the continuing obesity epidemic in the USA.”

Related:
Discuss this article in our forum
Parasitic worms could treat obesity disorders
Blood-brain barrier in obese people hotwired for fatty foods
9 Out Of 10 Americans Obese Or Overweight By 2030
Obesity Could Bankrupt UK Health System

Aspirin and vision loss: a significant association
Multitasking: you’re bad at it