You are here: Home › News › Space › Asteroid belt spotted around Vega
By Will Parker on January 9, 2013 in News, Space

Astronomers say they have spotted evidence for an asteroid belt encircling Vega, a star 25 lights years from Earth and the second brightest in the northern sky. The new observations that utilized the Spitzer and Herschel telescopes hint that Vega could be much like our own solar system and may contain Earth-like planets.

The discovery, by a University of Arizona led team, makes Vega very similar to its twin, a star called Fomalhaut. Both stars now are known to have inner, warm asteroid belts and outer, comet-filled belts, similar in architecture to the asteroid and Kuiper belts in our own solar system.

“Finding an asteroid belt similar to the one in our solar system and other nearby bright stars is exciting,” said Kate Su, lead author of a paper on the findings accepted for publication in the Astrophysical Journal. “The wide gap between the two debris belts strongly suggests that multiple planets orbit these stars even though we can’t see them. We know this because in systems without planets, the debris material is evenly distributed.”

Su explained planets create gaps in debris disks by a process called “sculpting.” The structure of the debris around Vega and Fomalhaut is divided into an inner “warm” belt and an outer “cold” belt with a large gap separating them. The temperature of the “warm” belt was measured to be minus 190 degrees Fahrenheit, while the outer belt is minus 370 degrees. 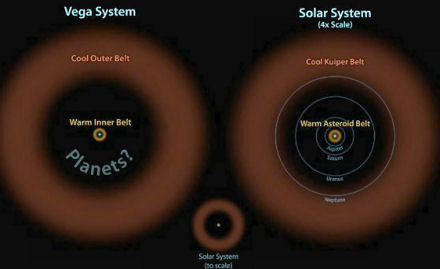 In our solar system, the inner asteroid belt between Mars and Jupiter is maintained by the gravity of the terrestrial planets and the giant planets. The giant planets exclusively sculpt the outer Kuiper belt. Unlike Kuiper belt objects, which resemble dirty snowballs because they contain large amounts of water ice, objects in the asteroid belt don’t stay cold enough to retain much ice, which sublimates into space, leaving behind rocky bodies.

Fomalhaut has a single known candidate planet orbiting it, Fomalhaut b, which stands as one of the dozen or so exoplanets that have been directly imaged. No planets have been detected around Vega, but the new asteroid belt observations strongly suggest their presence.

Interestingly, the inner and outer belts around Vega and Fomalhaut contain far more material than our own asteroid and Kuiper belts. The reason, according to Su, is twofold: “The star systems are far younger than our own, which has had hundreds of millions of more years to clean house, so to speak, and the systems formed from an initially more massive cloud of gas and dust than our solar system.”

The gap between the inner and outer debris belts for Vega and Fomalhaut also proportionally corresponds to the distance between our sun’s asteroid and Kuiper belts. This distance works out to a ratio of about 1:10, with the outer belt 10 times farther away from its host star than the inner belt. In our solar system, the asteroid belt lies roughly two to three times farther from the sun than the Earth, and the Kuiper belt starts at around 30 times the sun-Earth distance. Vega’s and Fomalhaut’s asteroid belts begin about four times more distant than our own asteroid belt, again in proportion to their system’s higher mass and luminosity.

As for the large gap between the two belts, a single, supersized planet dozens of times the mass of Jupiter could gravitationally carve out such an area by clearing and accreting stray dust. But previous planet-hunting surveys would have spotted any object of that magnitude. Instead, several Jupiter-sized or smaller planets that have not been detected yet better fit the bill for creating a dust-free zone between the debris disks. A good comparison star system is HR 8799, which has four known planets that sweep up the space between two similar disks of debris.

“Overall, the large gap between the warm and the cold belts is a signpost that points to multiple planets likely orbiting around Vega and Fomalhaut,” said Su. “Our finding echoes other recent research which indicates low-mass planets are more numerous than massive ones and that multiple exoplanet systems are also rather common.”