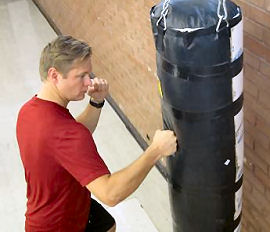 "The role aggression has played in our evolution has not been adequately appreciated," says Professor David Carrier, senior author of the study appearing in the Journal of Experimental Biology. "There are people who do not like this idea, but it is clear that compared with other mammals, great apes are a relatively aggressive group, with lots of fighting and violence, and that includes us. We're the poster children for violence."

Carrier agrees that human hands are evolved for manual dexterity, but he says that's only part of the story. "The proportions of our hands also allow us to make a fist," protecting delicate hand bones, muscles and ligaments during hand-to-hand combat. As our ancestors evolved, "an individual who could strike with a clenched fist could hit harder without injuring themselves, so they were better able to fight for mates and thus more likely to reproduce," he says. "Fights also were for food, water, land and shelter to support a family, and over pride, reputation and for revenge," he adds.

To the researchers' surprise, the peak force was the same, whether the bag was punched with a fist or slapped with an open hand. However, a fist delivers the same force with one-third of the surface area as the palm and fingers, and 60 percent of the surface area of the palm alone. So the peak stress delivered to the punching bag was 1.7 to 3 times greater with a fist strike compared with a slap. "Because you have higher pressure when hitting with a fist, you are more likely to cause injury to tissue, bones, teeth, eyes and the jaw," Carrier noted.

Carrier's work challenges the idea that once our ancestors came out of the trees, the selection for climbing was gone, so evolutionary selection for manipulation became dominant, changing the shape of our ancestors' hands. "Human-like hand proportions appear in the fossil record at the same time our ancestors started walking upright 4 million to 5 million years ago. An alternative possible explanation is that we stood up on two legs and evolved these hand proportions to beat each other," Carrier suggests.

Carrier says that if manual dexterity was the only driving force, humans could have evolved manual dexterity with longer thumbs without the fingers and palms getting shorter. But, he adds, "there is only one way you can have a buttressed, clenched fist: the palms and fingers got shorter at the same time the thumb got longer."

Carrier notes that the human hand presents something of a paradox. "It is arguably our most important anatomical weapon, used to threaten, beat and sometimes kill to resolve conflict," he said. "Yet it is also the part of our musculoskeletal system that crafts and uses delicate tools, plays musical instruments, produces art, conveys complex intentions and emotions, and nurtures. More than any other part of our anatomy, the hand represents the identity of Homo sapiens. Ultimately, the evolutionary significance of the human hand may lie in its remarkable ability to serve two seemingly incompatible but intrinsically human functions."