You are here: Home › Animal Kingdom › News › Three new species of venomous loris identified
By Will Parker on December 14, 2012 in Animal Kingdom, News 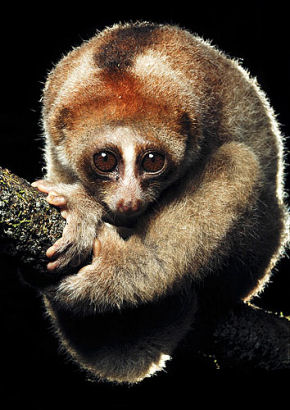 “Four separate species are harder to protect than one, since each species needs to maintain its population numbers and have sufficient forest habitat,” said Munds. “Unfortunately, in addition to habitat loss to deforestation, there is a booming black market demand for the animals. They are sold as pets, used as props for tourist photos or dismembered for use in traditional Asian medicines.”

Co-researcher Anna Nekaris added that while YouTube videos of lorises being tickled, holding umbrellas or eating with forks have become wildly popular, keeping them as pets is cruel and domesticating them is not feasible. “CNN recently promoted loris videos as ‘feel good’ entertainment,” she noted. “In truth, the lorises gripping forks or umbrellas were simply desperate to hold something. The arboreal animals are adapted to spending their lives in trees constantly clutching branches. Pet keepers rarely provide enough climbing structures for them.”

“Even zoos have difficulty meeting their nutritional needs for certain insects, tree gums and nectars,” added Munds. “Nearly all the primates in the pet trade are taken from the wild, breaking the bonds of the lorises’ complex and poorly understood social structures. The teeth they use for their venomous bite are then torn out. Many of them die in the squalid conditions of pet markets. Once in the home, pet keepers don’t provide the primates with the social, nutritional and habitat requirements they need to live comfortably. Pet keepers also want to play with the nocturnal animals during the day, disrupting their sleep patterns.”

LORI LOUGHLIN - WITH HER TWO DAUGHTERS