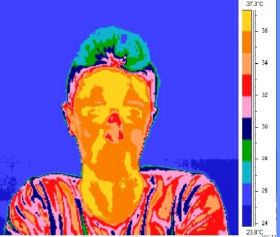 Applying thermography techniques to the field of psychology, Spanish scientists have observed the "Pinocchio effect," where a person's nose becomes warmer when they are lying. The researchers, from the University of Granada, also found that our face temperature drops when we are performing challenging mental tasks.

Thermography was developed in the USA during World War II to detect enemy movement at night and, now, researchers Emilio Gˇmez Milán and Elvira Salazar Lˇpez are pioneering its use in measuring physiological changes under a variety of stimuli.

Salazar added that sexual excitement and desire can also be identified using thermography. "They induce an increase in chest and genital temperature. Our study demonstrates that - in physiological terms - men and women get excited at the same time, even although women say they are not excited or only slightly excited," she noted. The researchers also demonstrated that thermography can be used to measure empathic states. Salazar said that in experiments where a subject received an electric shock to the arm, an empathic observer would experience a rise in temperature in their arm.