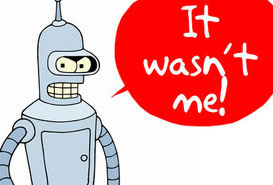 The development of the new robots is being led by Professor Ronald Arkin at the Georgia Institute of Technology. Arkin's research previously focused on robotic hide-and-seek, or more specifically, the beliefs and communications of a robot attempting to hide from another robot. His new research is funded by the Office of Naval Research and is detailed in the current issue of IEEE Intelligent Systems.

Some of Arkin's current work is informed by biological research that analyzed how squirrels gather acorns, store them, and keep them safe. That research showed that, as expected, squirrels routinely patrol their hidden caches of acorns, going back and forth to check on them. But when another squirrel shows up to raid the hiding spots, the hoarding squirrel changes its behavior. Instead of checking on the true locations, it visits empty cache sites, in an attempt to deceive the predator.

Arkin's team have now implemented the same strategy into a robotic model and demonstrated that the deceptive behaviors work. In this case, the deceiving robot lured the "predator" robot to the false locations, delaying the discovery of the protected resources.

"This application could be used by robots guarding ammunition or supplies on the battlefield," explained Arkin. "If an enemy were present, the robot could change its patrolling strategies to deceive humans or another intelligent machine, buying time until reinforcements are able to arrive."

Arkin's team investigated whether a simulated babbler is more likely to survive if it fakes strength. The team's simulations, based on biological models of dishonesty and the handicap principle, show that deception is the best strategy when the addition of deceitful agents pushes the size of the group to the minimum level required to frustrate the predator enough for it to flee. He says the reward for deceit in a few of the agents sometimes outweighs the risk of being caught.

Arkin thinks this tactic has potentially wide application in defense. "In military operations, a robot that is threatened might feign the ability to combat adversaries without actually being able to effectively protect itself," he explained. "Being honest about the robot's abilities risks capture or destruction. Deception, if used at the right time in the right way, could possibly eliminate or minimize the threat."

But while his rudimentary decepticons are successfully deceiving each other, Arkin is the first to admit that there are serious ethical questions regarding robot deception behavior with humans. "When these research ideas and results leak outside the military domain, significant ethical concerns can arise," he mused. "We strongly encourage further discussion regarding the pursuit and application of research on deception for robots and intelligent machines."