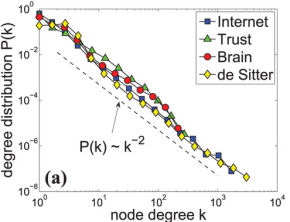 By performing supercomputer simulations of the Universe, researchers have shown that the causal network representing the large-scale structure of space and time is a graph that shows remarkable similarity to other complex networks such as the Internet, as well as social and biological networks. A paper describing the simulations in the journal Nature’s Scientific Reports speculates that some as-yet unknown fundamental laws might be at work.

“By no means do we claim that the Universe is a global brain or a computer,” said paper co-author Dmitri Krioukov, at the University of California, San Diego. “But the discovered equivalence between the growth of the Universe and complex networks strongly suggests that unexpectedly similar laws govern the dynamics of these very different complex systems.”

After the downscaling, the research team performed simulations of the Universe’s growing causal network. By parallelizing and optimizing the application, the researchers were able to complete in just over one day a computation that was originally projected to require three to four years.

“We discovered that the large-scale growth dynamics of complex networks and causal networks are asymptotically [at large times] the same, explaining the structural similarity between these networks,” said Krioukov, who believes the findings have key implications for both science and cosmology.

“The most frequent question that people may ask is whether the discovered asymptotic equivalence between complex networks and the Universe could be a coincidence,” he explained. “Of course it could be, but the probability of such a coincidence is extremely low. Coincidences in physics are extremely rare, and almost never happen. There is always an explanation, which may be not immediately obvious.”