You are here: Home › Mind and Brain › News › Rhythmic nature of consciousness probed
By Will Parker on November 22, 2012 in Mind and Brain, News 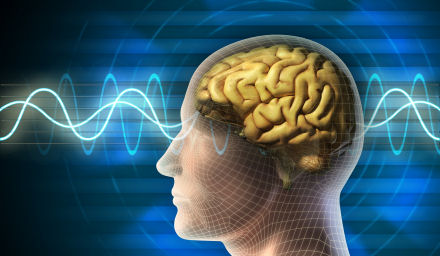 Understanding how our brains encode thoughts at the cellular level may be a step closer after neuroscientists at MIT discovered groups of neurons encoding specific behavioral rules by oscillating in synchrony, a finding that suggests conscious thought emerges from oscillatory cycles in the brain. The findings, published in Neuron, could help science to finally unravel the physical basis of consciousness in the brain.

The new work builds on the idea that ensembles of neurons in the brain represent unique pieces of information. “As we talk, thoughts float in and out of our heads. Those are all ensembles forming and then reconfiguring to something else. It’s been a mystery how the brain does this,” said lead scientist Earl Miller. “That’s the fundamental problem that we’re talking about – the very nature of thought itself.”

Miller’s research team identified two neural ensembles in the brains of monkeys trained to respond to objects based on either their color or orientation. This task requires cognitive flexibility – the ability to switch between two distinct sets of rules for behavior. “Effectively what they’re doing is focusing on some parts of information in the world and ignoring others. Which behavior they’re doing depends on the context,” explained team member Tim Buschman.

As the monkeys switched between tasks, the researchers measured the brain waves produced in different locations throughout the prefrontal cortex, where most planning and thought takes place. When the animals responded to objects based on orientation, the researchers found that certain neurons oscillated at high frequencies that produce so-called beta waves. When color was the required rule, a different ensemble of neurons oscillated in the beta frequency. Some neurons overlapped, belonging to more than one group, but each ensemble had its own distinctive pattern.

“What this suggests is that orientation was dominant, and color was weaker. The brain was throwing this blast of alpha at the orientation ensemble to shut it up, so the animal could use the weaker ensemble,” Miller explained.

The researchers are now trying to figure out how these neural ensembles coordinate their activity as the brain switches back and forth between different rules or thoughts. Some neuroscientists have theorized that deeper brain structures, such as the thalamus, handle this coordination, but no one knows for sure.

Miller notes that a fundamental characteristic of consciousness is that we can only hold a few thoughts simultaneously. These oscillations may explain why that is: Previous studies have shown that when an animal is holding two thoughts in mind, two different ensembles oscillate in beta frequencies, out of phase with one another.

“That immediately suggests why there’s a limited capacity to consciousness: Only so many balls can be kept in the air at the same time, only a limited amount of information can fit into one oscillatory cycle,” Miller suggested.

Music and Your Mind: Listening with a New Consciousness - 1st Edition 1973