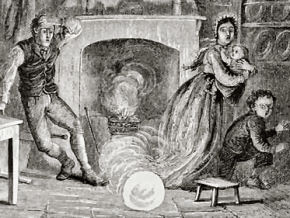 Lowke, working at the CSIRO in Australia, has been studying ball lightning since the 1960s. While he admits he's never seen it himself, he says that eye witness accounts of ball lightning formation and its predilection for glass surfaces - and how it can pass through glass - lend support to his new theory.

His paper detailing the math behind ball lightning asserts that the phenomenon is really an ion discharge. He proposes ball lightning is caused when leftover ions, which are very dense, are swept to the ground following a lightning strike. As for how they pass through glass, he says this is a result of "a stream of ions accumulating on the outside of a glass window and the resulting electric field on the other side excites air molecules to form a ball discharge."