You are here: Home › News › Space › Earth-sized planet found nearby in Alpha Centauri system
By Will Parker on October 18, 2012 in News, Space 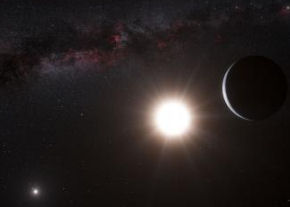 Astronomers from the European Southern Observatory (ESO) have discovered a rocky planet about the same mass as Earth orbiting a star in the Alpha Centauri system – the closest star system to Earth. Details of the discovery appear in the journal Nature.

Alpha Centauri is one of the brightest objects in the southern sky and is only 4.3 light-years distant. It is a triple star system, consisting of two stars similar to our own Sun orbiting close to each other (designated Alpha Centauri A and B), and a more distant and faint red star known as Proxima Centauri.

The new exoplanet, which orbits Alpha Centauri B, was detected using the HARPS instrument located at ESO’s La Silla Observatory in Chile. HARPS measures the radial velocity of a star – its speed towards or away from the Earth – with extraordinary precision. When a planet is in orbit around a star, gravitation causes the star to cyclically move towards and away from the Earth.

This slight change in position induces a shift of the star’s spectrum towards longer wavelengths as it moves away (redshift) and a blueshift as it approaches. This tiny shift of the star’s spectrum can be measured with HARPS and used to infer the presence of a planet. The effect is minute – causing the star to move back and forth at no more than 1.8 km/hour (1.1 mph). The new discovery represents the highest precision observation ever achieved using HARPS.

Astronomer Xavier Dumusque, from Geneva Observatory, said that Alpha Centauri B is very similar to our own Sun but slightly smaller and less bright. The newly discovered planet, with a mass of a little more than that of the Earth, is orbiting about six million kilometers away from the star, much closer than Mercury is to the Sun in our own solar system.

“This is the first planet with a mass similar to Earth ever found around a star like the Sun. Its orbit is very close to its star and it must be much too hot for life as we know it,” added Stephane Udry, also from Geneva Observatory, “but it may well be just one planet in a system of several. Our other HARPS results and new findings from Kepler both show clearly that the majority of low-mass planets are found in such systems.”