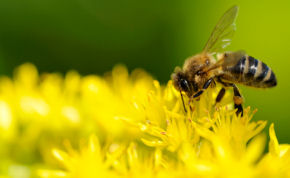 Hoping to gain insights into what's needed for creating artificial intelligence, scientists from the Universities of Sheffield and Sussex are embarking on a project to produce a computer simulation of a honeybee brain.

The team said they will build models of the systems in the brain that govern a honeybee's vision and sense of smell. They then hope to create the first flying bee robot able to sense and act as autonomously as a bee, rather than just carry out a pre-programmed set of rote instructions.

Sheffield's Dr James Marshall said that although the brain of a bee was relatively simple compared to mammalian brains, it was capable of creating complex behaviors. "So far, researchers have typically studied brains such as those of rats, monkeys, and humans, but actually 'simpler' organisms such as social insects have surprisingly advanced cognitive abilities" he explained.

A big chunk of the processing for the artificial brain will be performed by hardware donated by the NVIDIA Corporation. The hardware is based on high-performance processors known as GPU accelerators that generate the 3D graphics on home PCs and games consoles. Marshall says these accelerators provide a very efficient way of performing the massive calculations needed to simulate a brain using a standard desktop PC - rather than on a large, expensive supercomputing cluster.

The researchers involved in the project, known as "Green Brain," believe that developing a model of a honeybee brain will drive forward our knowledge of how a brain's cognitive systems work, leading to advances in understanding animal and human cognition. "Because the honeybee brain is smaller and more accessible than any vertebrate brain, we hope to eventually be able to produce an accurate and complete model that we can test within a flying robot," said Marshall.

"Not only will this pave the way for many future advances in autonomous flying robots, but we also believe the computer modeling techniques we will be using will be widely useful to other brain modeling and computational neuroscience projects," added co-researcher Dr Thomas Nowotny.