You are here: Home › Health › Genetics › News › Semen protein acts as “master regulator” in females
By Will Parker on September 12, 2012 in Genetics, News 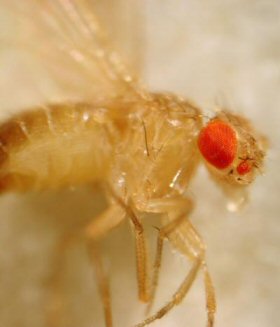 Working with fruit-flies (Drosophila melanogaster), University of East Anglia scientists have observed “remarkable” changes in female gene expression after exposure to a protein in semen. The researchers say the effects, which may also exist in other species, include altered fertility, immunity, libido, eating and sleep patterns. Published in the journalProceedings of the Royal Society B, the new findings add to the growing list of intriguing physiological effects triggered by exposure to semen.

Lead researcher Tracey Chapman said that a single protein found in semen known as the “sex peptide” changes the expression of a “remarkable array of many genes in females – both across time and in different parts of the body.”

Chapman says the semen protein is like a “master regulator” which means that males effectively have a direct and global influence on the behaviour and reproductive system of the female. She posits that such effects may well occur across many species.

She added that the effects of semen proteins can favour the interests of males whilst generating costs in females, resulting in sexual conflict. “For example, there can be a tug-of-war, where males employ semen proteins to ensure that females make a large investment in the current brood – even if that doesn’t suit the longer term interests of females,” she explained.

Regulation of Pattern of Gene Expression by Controlling Elements in Maize by M..

Teratological Correlations and the Mechanism of Gene Expression by Landauere, ..

II. The Role of the Nucleus: Genetic Systems Regulating Gene Expression during..

Polycomblike: A Gene that Appears to be Required for the Normal Expression of ..