You are here: Home › News › Space › Sugar molecules observed in distant planet formation
By Will Parker on August 30, 2012 in News, Space 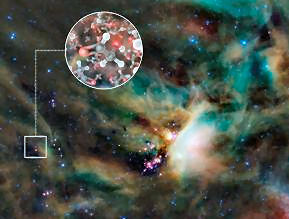 For the first time, astronomers have identified molecules of glycolaldehyde – a simple form of sugar – in the gas surrounding a distant young star. The discovery shows that some of the chemical compounds needed for life existed in this relatively young solar system at the time of planet formation. The new findings, appearing in Astrophysical Journal Letters, add to previous observations of relatively complex compounds surrounding many other stars.

Using the Atacama Large Millimeter/submillimeter Array (ALMA) in Chile, the astronomers found the molecules of glycolaldehyde in the gas surrounding a young binary star, with similar mass to the Sun, called IRAS 16293-2422. Glycolaldehyde has been seen in interstellar space before, but this is the first time it has been found so near to a Sun-like star.

“[It’s] a simple form of sugar, not much different to the sugar we put in coffee,” explains Jes Jørgensen, the lead author of a paper detailing the discovery. “This molecule is one of the ingredients in the formation of RNA, which is one of the building blocks of life.”

IRAS 16293-2422 is located around 400 light-years away, comparatively close to Earth, which makes it an excellent target for astronomers studying the molecules and chemistry around young stars.

The astronomers behind the discovery are now wondering just how complex these space-borne molecules can become. “This could tell us something about how life might arise elsewhere, and ALMA observations are going to be vital to unravel this mystery,” explained Jørgensen.

Related:
Discuss this article in our forum
US astronomers give nod to complex organics in space
Nomad planets seeding life throughout the universe?
Milky Way has “billions” of habitable planets
Intergalactic gas cloud could hold universe’s “missing” matter