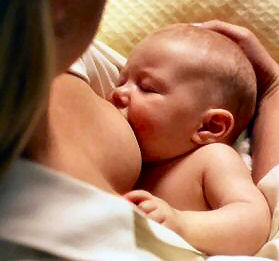 In the new study, appearing in Current Nutrition & Food Science, the researchers grew bacteria in samples of infant formula, cow’s milk and breast milk. For the infant formula, the researchers used three brands each of popular milk- and soy-based products. Breast milk was donated and processed to separate different components, including proteins, fats and carbohydrates. The team also tested a purified form of an antibody called secretory immunoglobulin A (SIgA), which is abundant in breast milk and plays a role in establishing an infant’s immune system.

The infant formulas, the milk products and the SIgA were incubated with two strains of E. coli bacteria – necessary early inhabitants of the gut that are helpful cousins to their more dangerous variety associated with food poisoning.

Duke researcher William Parker said that within minutes the bacteria began multiplying in all of the specimens, but there was an immediate difference in the way the bacteria grew. In the breast milk, bacteria stuck together to form biofilms (thin, adherent layers of bacteria that serve as a shield against pathogens and infections). Bacteria in the infant formula and cow’s milk proliferated wildly, but it grew as individual organisms that did not aggregate to form a protective barrier. The bacteria in SIgA produced mixed results, suggesting that this antibody by itself isn’t enough to trigger the beneficial biofilm formation.

“This study is the first we know of that examines the effects of infant nutrition on the way that bacteria grow, providing insight to the mechanisms underlying the benefits of breast feeding over formula feeding for newborns,” said Parker. “Only breast milk appears to promote a healthy colonization of beneficial biofilms.”

Parker said additional studies should now explore why human whey has the clumping effect on the bacteria, and whether it has a similar effect on strains of bacteria other thanE. coli. “Knowing how breast milk conveys its benefits could help in the development of infant formulas that better mimic nature,” he added. “This could have a long-lasting effect on the health of infants who, for many reasons, may not get mother’s milk.”

A mother is breastfeeding her baby Motherhood Vintage photo