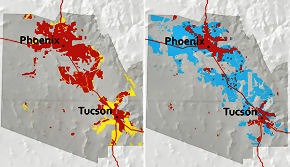 Scientists studying the impact of urban expansion on climate have found that average summertime temperatures in one US area could increase by as much as 4 degrees Celsius over the next few decades. The findings, published in the journal Nature Climate Change, show that warming from urbanization can be as significant as projected warming due to increased levels of greenhouse gases.

The Arizona State University researchers behind the study set out to investigate how climate impacts arising from the built environment would affect urban residents in the area known as the Sun Corridor (taking in Phoenix, Tucson, Prescott and Nogales). The Sun Corridor is the most rapidly growing urban area in the United States and its population is expected to exceed 9 million people by 2040.

"We posed a fundamental set of questions in our study, examining the different scenarios of Sun Corridor expansion through mid-century. We asked what are the summertime regional climate implications, and how do these impacts compare to climate change resulting from increased emissions of greenhouse gases," says Matei Georgescu, the study's lead author.

The researchers utilized projections of Sun Corridor growth up to 2050, incorporating maximum and minimum growth scenarios into a regional climate model. The group conducted their numerical simulations using an "ensemble-based" approach. By modifying their model's initial conditions and repeating their simulations a number of times, they were able to test the robustness of their results. They then compared these impacts with experiments using an urban representation of modern-day central Arizona. Their conclusions indicate substantial summertime warming.

"The worst case expansion scenario we utilized led to local maximum summer warming of nearly 4 degrees Celsius. In the best case scenario, where Sun Corridor expansion is both more constrained and urban land use density is lower, our results still indicate considerable local warming, up to about 2 degrees Celsius," Georgescu said.

The study authors admit, however, that pinning precise figures on the relative contribution of each effector is difficult. "The actual contribution of urban warming relative to summertime climate change warming depends critically on the path of urbanization, the conversion of natural to urban landscapes, and the degree to which we continue to emit greenhouse gases," said Alex Mahalov, a study co-author.

Georgescu added that one take-home message from this study is that the incorporation of sustainable policies need to extend beyond just greenhouse gas emissions. "Truly sustainable adaptation, from an environmental standpoint, must extend to the entire climate system, including impacts on temperature and hydrology," he said.