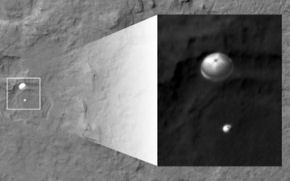 The one-tonne Curiosity rover landed on flat ground, on the northern side of Gale's central mountain, known as Mount Sharp (pictured below). 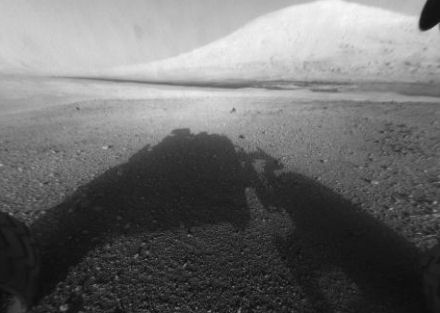 The mission's project scientist John Grotzinger said the first pictures from the rover's low resolution hazcams had a recognizable look about them. "You see a scene that's very familiar to you from other images of Mars - what is undoubtedly a windswept plain with coarse fragments left behind. The science team is initially impressed by the rather uniform grain-size distribution of the coarser particles."

Eventually, the rover will begin traversing the crater to the base of Mount Sharp where it is expected to find rocks that were laid down billions of years ago in the presence of liquid water. Curiosity's instruments will probe these sediments for evidence that past environments on Mars could once have favoured microbial life.