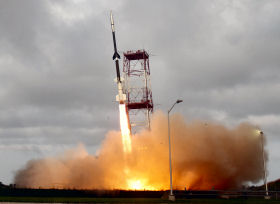 Developed by NASA, a large heat shield inflated with nitrogen has successfully completed a re-entry trip through Earth's atmosphere while travelling at speeds of up to 7,600 mph. The purpose of the Inflatable Re-entry Vehicle Experiment (IRVE-3) test was to show that a space capsule can use an inflatable outer shell to slow and protect itself as it enters an atmosphere during planetary entry and descent.

Plummeting at hypersonic speeds through the Earth's atmosphere, engineers used four onboard cameras to confirm the inflatable shield held its shape while being buffeted by the forces and heat of re-entry. Onboard instruments provided temperature and pressure data which the researchers will use to refine future inflatable heat shield designs.

The new test is a follow-on to the successful IRVE-2, which showed an inflatable heat shield could survive intact after coming through Earth's atmosphere. IRVE-3 was the same size as IRVE-2, but had a heavier payload and was subjected to a much higher re-entry heat, similar to what a heat shield might encounter in space.

"It's great to see the initial results indicate we had a successful test of the hypersonic inflatable aerodynamic decelerator," said James Reuther, deputy director of NASA's Space Technology Program. "This demonstration flight goes a long way toward showing the value of these technologies to serve as atmospheric entry heat shields for future space."