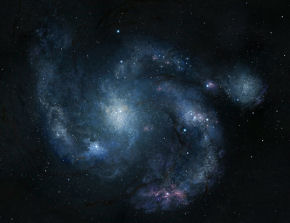 Looking back 11 billion years, astronomers using the Hubble Space Telescope have observed for the first time a spiral galaxy in the early universe, billions of years before other comparable spiral galaxies formed. Current astronomical theories suggest that such “grand-design” spiral galaxies – those with prominent, well-formed spiral arms – simply didn’t exist at such an early time in the history of the universe. “The fact that this galaxy exists is astounding,” said David Law, from the University of Toronto’s Dunlap Institute for Astronomy & Astrophysics and co-author of a new study detailing the discovery in Nature

Typically, the mix of galaxy structures observed in the early universe is quite diverse, with a large number of irregularly shaped galaxies. But the newly discovered galaxy, known as BX442, is radically different. “As you go back in time to the early universe, galaxies look really strange, clumpy and irregular, not symmetric,” said Alice Shapley, a UCLA astronomer and study co-author. “The vast majority of old galaxies look like train wrecks. Our first thought was, why is this one so different, and so beautiful?”

Deciding to take a reality check on their new discovery, Law and Shapley went to the W.M. Keck Observatory in Hawaii to study spectra from some 3,600 locations in and around BX442. This provided valuable information that enabled them to determine that it actually is a rotating spiral galaxy – and not, for example, two galaxies that happened to line up in the image.

“We first thought this could just be an illusion, and that perhaps we were being led astray by the picture,” Shapley said. “What we found when we took the spectral image of this galaxy is that the spiral arms do belong to this galaxy. It wasn’t an illusion. We were blown away.” Law and Shapley also see some evidence of an enormous black hole at the center of the galaxy, which may play a role in the evolution of BX442.

So, why does BX442 look like galaxies that are so common today but were so rare back then? Law and Shapley think the answer may have to do with a companion dwarf galaxy, which the OSIRIS spectrograph reveals as a blob on the right of the image, and the gravitational interaction between them. Support for this idea is provided by a numerical simulation conducted by co-author Charlotte Christensen, from the University of Arizona. “BX442 looks like a nearby galaxy, but in the early universe, galaxies were colliding together much more frequently,” she said. “Gas was raining in from the intergalactic medium and feeding stars that were being formed at a much more rapid rate than they are today; black holes grew at a much more rapid rate as well. The universe today is boring compared to this early time.”

Shapley believes that BX442 represents a link between early galaxies that are much more turbulent and the rotating spiral galaxies that we see around us. “Indeed, this galaxy may highlight the importance of merger interactions at any cosmic epoch in creating grand design spiral structure,” she suggests.