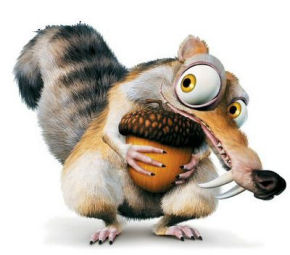 The obsessive thieving and stashing of seeds by rodents provides a vital seed-dispersal service in tropical forests, say scientists whose research may solve a long standing puzzle in ecology. The new findings are based on research conducted in Panama and appear in the journal Proceedings of the National Academy of Sciences.

The mystery stems from the extinction 10,000 years ago of massive forest-dwelling mammals known as gomphotheres – ancestors of today’s modern elephant. It is thought that the large seeds produced by tropical trees were ingested and then excreted whole by the huge creatures, thus ensuring the widespread dispersal of the seeds.

The dispersal of seeds is crucial to the survival of many tropical trees. Without dispersal services, only a tiny fraction of the seeds will become new trees, and there is no chance for genes to mix. Why large-seeded plants didn’t become extinct at the same time as the seed-dispersing gomphotheres has until now baffled ecologists.

By attaching tiny radio transmitters to more than 400 seeds, the scientists found that 85 percent of the seeds were buried in caches by common tropical lowland rodents known asagoutis. The half-meter long agoutis transport the seeds around in their mouths and bury them for times when food is scarce.

The tracking revealed a surprising finding: when the rodents dig up the seeds, they usually don’t eat them, but instead move them to a new site and bury them, often many times. One seed in the study was moved 36 times.

Using remote cameras to monitor the animals, the researchers also discovered that frequent seed movements were primarily caused by animals stealing seeds from one another. Ultimately, 35 percent of the seeds ended up more than 100 meters from their origin. “Agoutis moved seeds at a scale that none of us had ever imagined,” said researcher Patrick Jansen, from the Smithsonian Tropical Research Institute.

“We had observed seeds being moved and buried up to five times, but in this system it seems that re-caching behavior is ‘on steroids,'” added co-researcher Ben Hirsch, from Ohio State University.

Jansen believes that by taking over the role of the extinct Pleistocene mammals in dispersing large seeds, the thieving, scatter-hoarding agoutis may have saved large-seeded tropical trees from extinction.