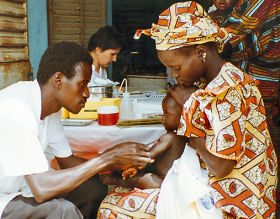 A new chemical stabilizer - based on silk - keeps the bioactive molecules in vaccines and antibiotics stable for long periods at temperatures of up to 140 degrees Fahrenheit. The developers, funded by the National Institutes of Health, say their technique could dramatically improve access to medications in the developing world.

Without continuous refrigeration, the chemical structures in vaccines and antibiotics can change, resulting in less potent or ineffective medications. Refrigeration - from production until the meds are used in treatment - is a costly process, accounting for as much as 80 percent of the price of vaccinations.

The need for a "cold chain" has been a difficulty for health care providers, aid organizations, scientists and pharmaceutical companies for decades, especially in settings where electricity is limited. Nearly half of all global vaccines are lost due to failures in the cold chain.

In an attempt to solve this problem, lead researcher David Kaplan and his colleagues developed silk films that essentially "wrap up" the live bioactive molecules present in antibiotics and vaccines.

To test the silk stabilizers, Kaplan's team stored the measles, mumps, and rubella (MMR) vaccines for six months at the recommended 39.2 degrees Fahrenheit, as well as at 77, 98.6 , and 113 degrees Fahrenheit. The results show that encapsulation in the new silk films maintained the potency with minimal loss over time and enhanced stability, even at very high storage temperatures. Similarly, antibiotics entrapped in silk films maintained near optimal activity even at temperatures as high as 140 degrees. Details of the work appear in the Proceedings of the National Academy of Sciences.

The researchers say that the next step is to test the technique in the field. "New studies are already under way," says Kaplan. "We have already begun trying to broaden the impact of what we're doing to apply to all vaccines. Based on what we've seen with other proteins, peptides, and enzymes, there's no reason to believe that this wouldn't be universal. This could potentially eliminate the need for a cold-chain system, greatly decreasing costs and enabling more widespread availability of these life-saving drugs."