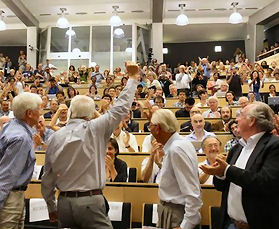 CERN physicists say they have enough statistical evidence to claim discovery of a new fundamental particle - a boson that may, pending further investigation, prove to be the so-called "god" particle responsible for the elusive Higgs field that gives other particles mass.

Yesterday's announcement (pictured) represents confirmation of the tantalizing preliminary data revealed late last year from the ATLAS and CMS detectors at CERN's Large Hadron Collider (LHC). "The results are preliminary but the 5 sigma [a very high level of certainty] signal at around 125 GeV we're seeing is dramatic. This is indeed a new particle. We know it must be a boson and it's the heaviest boson ever found," said CMS spokesperson Joe Incandela. "The implications are very significant." 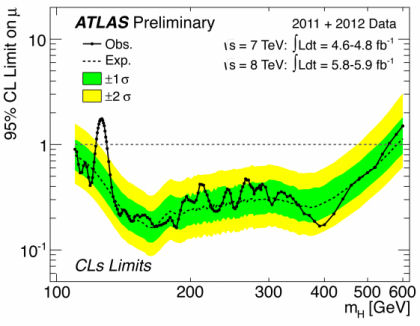 A more complete picture of today's observations will emerge later this year after the LHC provides the researchers with more data. The next step, according to CERN physicists, will be to determine the precise nature of the particle and its significance for our understanding of the universe. Are its properties as expected for the long-sought Higgs Boson, the final missing ingredient in the Standard Model of particle physics? Or is it something more exotic?

Specifically, the physicists want to examine the various decay pathways associated with the new particle. This could reveal anomalies in individual decay pathways - such as the number of photon decays or a paucity of four lepton results. This, they say, will provide fine-scale tests of the Standard Model.

But uncertainties surrounding the characteristics of the new particle haven't stopped the researchers at CERN celebrating. "We have reached a milestone in our understanding of nature," said CERN Director General Rolf Heuer. "The discovery of a particle consistent with the Higgs boson opens the way to more detailed studies, requiring larger statistics, which will pin down the new particle's properties, and is likely to shed light on other mysteries of our universe."