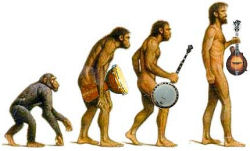 Software that uses Darwinian natural selection and the musical tastes of 7,000 people is well on the way to creating the perfect pop tune, according to evolutionary scientists from Imperial College London. A report on the project appears in the journal Proceedings of the National Academy of Sciences.

The scientists set out to test a theory that cultural changes in language, art and music evolve through Darwinian natural selection, in a similar way to how living things evolve. They simulated this cultural evolution by harnessing the power of a 7,000 strong internet audience in an experiment that was designed to answer several questions. Can music exist without being the product of a conscious, creative act? If so, what would that music sound like? Does everyone's ideal tune sound the same?

"Everyone 'knows' that music is made by traditions of musical geniuses. Bach handed the torch to Beethoven who gave it to Brahms; Lennon and McCartney gave it to the Gallaghers who gave it to Chris Martin. But is that really what drives musical evolution? We wondered whether consumer choice is the real force behind the relentless march of pop," explained Armand Leroi, co-author of the research and Professor of Evolutionary Developmental Biology. "Every time someone downloads one track rather than another they are exercising a choice, and a million choices is a million creative acts. After all, that's how natural selection created all of life on earth, and if blind variation and selection can do that, then we reckoned it should be able to make a pop tune. So we set up an experiment to explain it."

The computer algorithm behind the study, called DarwinTunes, maintains a population of 100 loops of music, each eight seconds long. Listeners scored loops in batches of 20 on a five-point scale from "I can't stand it!" to "I love it!" DarwinTunes then "mates" the top ten loops, pairing them up as "parents" and mingling musical elements of each pair, to create twenty new loops. These replace the original parents and the less pleasing non-parents. This process represents one "generation" of musical evolution. At the time of publication of the study, DarwinTunes had evolved through 2,513 generations.

In a separate experiment, Leroi and his co-researchers tested the like-ability of loops from different generations by asking listeners to rate them. Without knowing the generational age of the loops, the volunteers consistently ranked the more evolved music as more appealing. This, says Leroi, independently validates the assertion that the music is improving over time.

Leroi said members of the public can continue to help the music evolve, by taking part in the DarwinTunes experiment at http://darwintunes.org.