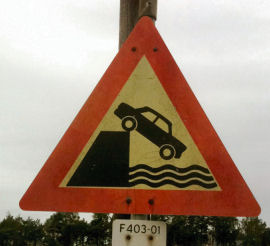 Based on an evaluation of more than 1,000 previous studies, a new meta-review by an international group of 18 scientists suggests the Earth is perilously close to a tipping point where resource consumption, ecosystem degradation, climate change, biodiversity loss and population growth will trigger massive changes in the biosphere.

"The last tipping point in Earth's history occurred about 12,000 years ago when the planet went from being in the age of glaciers, which previously lasted 100,000 years, to being in its current interglacial state. Once that tipping point was reached, the most extreme biological changes leading to our current state occurred within only 1,000 years. That's like going from a baby to an adult state in less than a year," explains Arne Mooers, professor of biodiversity at Simon Fraser University and one of the paper's authors. "Importantly, the planet is changing even faster now. The odds are very high that the next global state change will be extremely disruptive to our civilization."

The work, appearing in Nature, reads somewhat like the screenplay for a disaster movie, with the authors making urgent calls for unified global action. "Humans have not done anything really important to stave off the worst because the social structures for doing something just aren't there," said Mooers. "My colleagues who study climate-induced changes through the Earth's history are more than pretty worried. In fact, some are terrified."

The paper notes that studies of ecosystems show that once 50 percent or more of an area has been altered, the entire ecosystem can tip irreversibly into a state far different from the original, in terms of the mix of plant and animal species and their interactions. This situation typically is accompanied by species extinctions and a loss of biodiversity. Currently, to support a population of 7 billion people, about 43 percent of Earth's land surface has been converted to agricultural or urban use, with roads cutting through much of the remainder. Current trends suggest that half the Earth's land surface will be human-transformed by 2025.

"It really will be a new world, biologically, at that point," warns Anthony Barnosky, professor of integrative biology at the University of California, Berkeley, and lead author of the new paper. "The data suggests that there will be a reduction in biodiversity and severe impacts on much of what we depend on to sustain our quality of life, including, for example, fisheries, agriculture, forest products and clean water. This could happen within just a few generations."

Another co-author, Elizabeth Hadly from Stanford University, thinks we may already be past these tipping points in particular regions of the world. "I just returned from a trip to the high Himalayas in Nepal, where I witnessed families fighting each other with machetes for wood - wood that they would burn to cook their food in one evening. In places where governments are lacking basic infrastructure, people fend for themselves, and biodiversity suffers. We desperately need global leadership for planet Earth," she reports.

"Humanity is at a crossroads now, where we have to make an active choice," Barnosky said. "One choice is to acknowledge these issues and potential consequences and try to guide the future (in a way we want to). The other choice is just to throw up our hands and say, 'Let's just go on as usual and see what happens.'"

Mooers is more blunt, saying that "society globally has to collectively decide that we need to drastically lower our population very quickly. More of us need to move to optimal areas at higher density and let parts of the planet recover. Folks like us [developed nations] have to be forced to be materially poorer, at least in the short term. We also need to invest a lot more in creating technologies to produce and distribute food without eating up more land and wild species. It's a very tall order," he concludes.