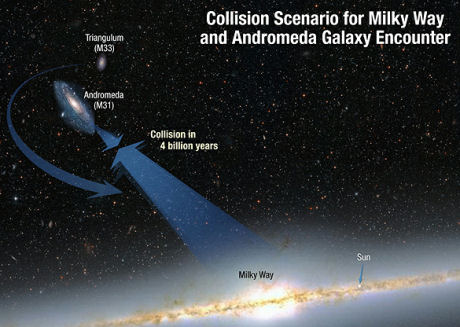 A century ago astronomers did not realize that Andromeda was a separate galaxy far beyond the stars of the Milky Way. Astronomer Edwin Hubble measured its vast distance by uncovering a variable star that served as a "milepost marker." Hubble went on to discover the expanding universe where galaxies are rushing away from us, but it was established early on that Andromeda is moving toward the Milky Way at about 250,000 miles per hour.

To complicate matters, M31's small companion, the Triangulum galaxy (M33), will join in the collision and perhaps later merge with the M31/Milky Way pair. There is a small chance that M33 will hit the Milky Way first.

The simulation derived from Hubble's data show that it will take an additional two billion years after the encounter for the interacting galaxies to completely merge under the tug of gravity and reshape into a single elliptical galaxy similar to the kind commonly seen in the local universe. 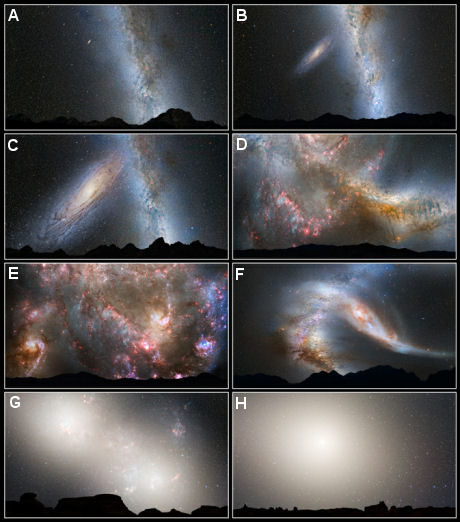 
"In the worst-case-scenario simulation, M31 slams into the Milky Way head-on and the stars are all scattered into different orbits," said team member Gurtina Besla, of Columbia University. "The stellar populations of both galaxies are jostled, and the Milky Way loses its flattened pancake shape with most of the stars on nearly circular orbits. The galaxies' cores merge, and the stars settle into randomized orbits to create an elliptical-shaped galaxy."

Previously, it was unknown whether the encounter would be a miss, glancing blow, or head-on crash; the outcome depending on Andromeda's tangential motion. Until now, astronomers had not been able to measure this, but the Hubble team conducted extraordinarily precise observations of its sideways motion that remove any doubt that it is destined to collide and merge with the Milky Way. The Hubble observations are detailed in three papers that will appear in an upcoming issue of the Astrophysical Journal.

Related:
Discuss this article in our forum
Watch an animation of the collision
Hundreds of rogue stars found outside galaxy
"Fleeing galaxies" tracked deeper into universe
Cosmic Collisions - Watching Merging Galaxies in the Act