You are here: Home › News › Space › Nomad planets seeding life throughout the universe?
By Will Parker on May 24, 2012 in News, Space 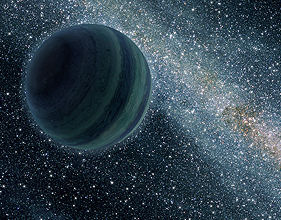 According to new calculations, planets adrift in space without a “home” solar system are abundant in the universe and scientists have proposed that these nomad planets might not only sustain life, but transport it as well.

The theory stems from a study published in theMonthly Notices of the Royal Astronomical Society that proposed an upper limit to the number of nomad planets that might exist in the Milky Way Galaxy: 100,000 for every star. And, say the authors, because the Milky Way is estimated to have 200 to 400 billion stars, that could put the number of nomad planets in the quadrillions.

While just an idea, it’s one that becomes more intriguing when considering not only the number of nomad planets, but the behavior of galaxies. “In the 20th century, many eminent scientists have entertained the speculation that life propagated either in a directed, random or malicious way throughout the galaxy,” said Roger D. Blandford, a co-author of the study and director of the Kavli Institute for Particle Astrophysics and Cosmology at Stanford. “One thing that I think modern astronomy might add to that is clear evidence that many galaxies collide and spray material out into intergalactic space. So life can propagate between galaxies too, in principle.”

As for whether a nomad planet could actually sustain life, the proof may be here on Earth. “If you imagine the Earth as it is today becoming a nomad planet, life on Earth is not going to cease,” said Dimitar D. Sasselov, Professor of Astronomy at Harvard University and a co-author. “That we know. It’s not even speculation at this point. Scientists already have identified a large number of microbes and even two types of nematodes that survive entirely on the heat that comes from inside the Earth.”

If there is an abundance of nomad planets, the researchers think they could play a dynamic role in the universe. In particular, if life can exist without the warmth of a nearby sun, it raises the possibility that, along with sustaining life, nomad planets could be transporting life to other regions of the galaxy, or to other galaxies.

Study co-author Louis Strigari, a research associate at the Kavli Institute, raises the intriguing possibility that these nomad planets could account for some of the universe’s mysterious dark matter. “Could they be the source of both dark matter and ordinary, baryonic matter that is “dark” simply because we haven’t detected it yet? Nomad planets would not be able to account for much of the unseen baryonic matter. We still don’t know about the mix of dark matter and luminous matter in our galaxy. And that’s the problem: we still don’t have a very great inventory of ordinary matter – even on the scale of our own sun. That sort of highlights what we don’t know,” he mused.

While current observation technologies can detect nomad planets using microlensing, observers are unable to say where the planet is other than somewhere between the Earth and the background star whose light it’s changing. Pinpointing the exact location is much more difficult. Blandford believes that identifying infrared radiation (heat) from a nomad planet may be possible. “Using this data, you could determine its motion and other characteristics, which would give you additional clues to the distance. If you are going to find a nomad planet by detecting its infrared radiation, it will likely be small and very close to our solar system,” he suggests.