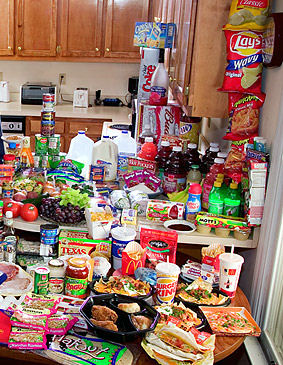 A new UCLA study with rodents is the first to show how a diet high in fructose sabotages memory and learning functions in the brain. While previous research showed how fructose harms the body through its role in diabetes and obesity, this study is the first to uncover how the sweetener influences the brain. "Our findings illustrate that what you eat affects how you think," said UCLA neurosurgeon Fernando Gomez-Pinilla. "Eating a high-fructose diet over the long term alters your brain's ability to learn and remember information." The Journal of Physiology has published the findings in its latest issue.

The study involved two groups of rats that each consumed a fructose solution for six weeks. The second group also received omega-3 fatty acids in the form of flaxseed oil and docosahexaenoic acid (DHA), which is believed to protect against damage to the brain's synapses.

The animals were trained on a maze twice daily for five days before starting the experimental diet. The researchers tested how well the rats were able to navigate the maze, which contained numerous holes but only one exit. The scientists placed visual landmarks in the maze to help the rats learn and remember the way. Six weeks later, the researchers tested the rats' ability to recall the route and escape the maze. What they saw surprised them.

"The second group of rats navigated the maze much faster than the rats that did not receive omega-3 fatty acids," Gomez-Pinilla said. "The DHA-deprived animals were slower, and their brains showed a decline in synaptic activity. Their brain cells had trouble signaling each other, disrupting the rats' ability to think clearly and recall the route they'd learned six weeks earlier."

The fructose-only rats also developed signs of resistance to insulin, a hormone that controls blood sugar and regulates synaptic function in the brain. An examination of the rats' brain tissue suggested that insulin had lost much of its power to influence the brain cells. "Because insulin can penetrate the blood-brain barrier, the hormone may signal neurons to trigger reactions that disrupt learning and cause memory loss," Gomez-Pinilla speculated.

He suspects that fructose is the culprit behind the DHA-deprived rats' brain dysfunction. Eating too much fructose could block insulin's ability to regulate how cells use and store sugar for the energy required for processing thoughts and emotions. "Insulin is important in the body for controlling blood sugar, but it may play a different role in the brain, where insulin appears to disturb memory and learning," he said. "Our study shows that a high-fructose diet harms the brain as well as the body. This is something new."

Related:
Discuss this article in our forum
Obesity linked to stupidity, brain scans show
Obesity and infertility linked across generations
9 Out Of 10 Americans Obese Or Overweight By 2030
Obesity Increases Alzheimer's Risk