You are here: Home › News › Prehistory › Dino farts warmed early climate
By Will Parker on May 8, 2012 in News, Prehistory 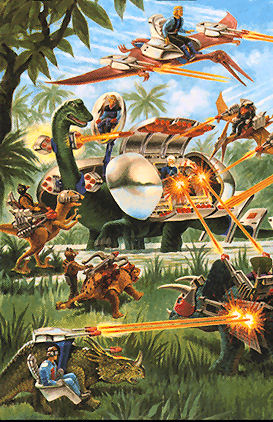 Mesozoic methane emissions from dinosaurs could, according to new calculations, have produced more of the notorious greenhouse gas than all modern sources – both natural and man-made – put together. The research, published inCurrent Biology, suggests the emissions could have significantly heated the already wet and warm climate.

Sauropod dinosaurs, say the researchers, were similar to cows, in that methane-producing microbes aided their digestion by fermenting the vegetation they ate. “A simple mathematical model suggests that the microbes living in sauropod dinosaurs may have produced enough methane to have an important effect on the Mesozoic climate,” explained researcher Dave Wilkinson, of Liverpool John Moores University.

Wilkinson and co-researcher Graeme Ruxton, from the University of St Andrews, were studying sauropod ecology when a question dawned on them: If modern cows produce enough methane gas to be of interest to climate scientists, what about sauropod dinosaurs?

Animal physiologists have studied methane production from a range of modern animals to derive equations that predict methane production based on the total mass of the animals in question. The researchers based their calculations on a medium-sized sauropod weighing around 20,000 kilograms, and population densities ranging from a few large adults to a few tens of individuals per square kilometer.

Before the industrial age, about 150 years ago, methane emissions were roughly 200 Tg per year. By comparison, modern ruminant animals, including cows, goats, and others, contribute methane emissions of 50 to 100 Tg per year. The researchers say the study’s conclusions; “serve as a useful reminder for the importance of microbes and methane for global climate.”