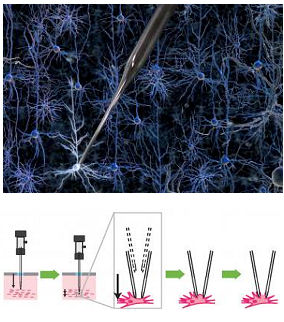 Researcher Suhasa Kodandaramaiah spent about four months learning the manual patch-clamp technique, giving him an appreciation for its difficulty. "When I got reasonably good at it, I could sense that even though it is an art form, it can be reduced to a set of stereotyped tasks and decisions that could be executed by a robot," he explained.

Kodandaramaiah and his colleagues developed a robotic arm that lowers a glass pipette into the brain of an anesthetized mouse with micrometer accuracy. As it moves, the pipette monitors a property called electrical impedance - a measure of how difficult it is for electricity to flow out of the pipette. If there are no cells around, electricity flows and impedance is low. When the tip hits a cell, electricity can't flow as well and impedance goes up.

The pipette takes two-micrometer steps, measuring impedance 10 times per second. Once it detects a cell, it can stop instantly, preventing it from poking through the membrane. "This is something a robot can do that a human can't," co-researcher Ed Boyden said. Once the pipette finds a cell, it applies suction to form a seal with the cell's membrane. Then, the electrode can break through the membrane to record the cell's internal electrical activity. Boyden says the robotic system can detect cells with 90 percent accuracy, and establish a connection with the detected cells about 40 percent of the time.

The team is now working on scaling up the number of electrodes so they can record from multiple neurons at a time, potentially allowing them to determine how different parts of the brain are connected. They are also working with collaborators to start classifying the thousands of types of neurons found in the brain. This "parts list" for the brain would identify neurons not only by their shape - which is the most common means of classification - but also by their electrical activity and genetic profile.

Boyden says he believes this is just the beginning of using robotics in neuroscience. "The method could be particularly useful in studying brain disorders such as schizophrenia, Parkinson's disease, autism and epilepsy," he adds. "In all these cases, a molecular description of a cell that is integrated with [its] electrical and circuit properties... has remained elusive. If we could really describe how diseases change molecules in specific cells within the living brain, it might enable better drug targets to be found." The researchers have created a startup company, Neuromatic Devices, to commercialize the device.