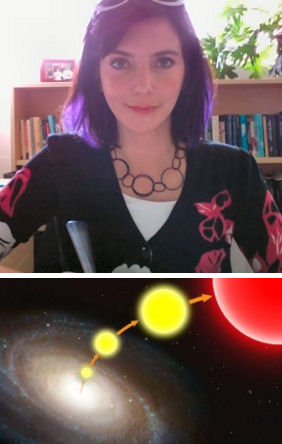 Vanderbilt University astronomers say they have identified more than 600 stars that have been violently flung out of the Milky Way toward Andromeda; stellar victims, the scientists believe, of the supermassive black hole at our galaxy's core.

Previously, 16 rogue stars traveling fast enough to escape the galaxy's gravitational grasp had been discovered, but they were observed while they were still inside the galaxy. The new observations are of rogue stars that have already fled the galaxy and are traveling in intergalactic space.

Writing about the new observations in the Astronomical Journal , the astronomers say the newly identified rogue stars are travelling at hypervelocities of over two-million-miles-per-hour. The only mechanism they believe could give the stars that kind of kick is a close encounter with the supermassive black hole at the galaxy's core.

"These stars really stand out. They are red giant stars with high metallicity which gives them an unusual color," says Kelly Holley-Bockelmann (pictured), who led the study. "Metallicity" is a measure of the proportion of chemical elements other than hydrogen and helium that a star contains. In this case, high metallicity is a signature that indicates an inner galactic origin: Older stars and stars from the galactic fringes tend to have lower metallicities.

Holley-Bockelmann identified candidate stars by analyzing the millions catalogued in the Sloan Digital Sky Survey. "We figured that these rogue stars must be there, outside the galaxy, but no one had ever looked for them. So we decided to give it a try," she explained.

Astronomers estimate that the Milky Way's central black hole has a mass of around four million solar masses - producing a gravitational field strong enough to accelerate stars to hypervelocities. Such a scenario would involve a binary pair of stars that get caught in the black hole's grip. As one of the stars spirals in towards the black hole, its companion is flung outward at a tremendous velocity.

Holley-Bockelmann said the rogue stars would have been small stars like our Sun when they tangled with the central black hole. As they traveled outward, they continued to age until they reached the red giant stage. Even traveling at hypervelocities, it would take a star about 10 million years to travel from the central hub to the spiral's edge, 50,000 light years away. "Studying these rogue stars can provide us with new insights into the history and evolution of our home galaxy," she concluded.