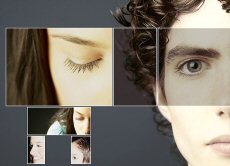 Past research indicated that the left side of the face is more intense and active during emotional expression, so Wake's Kelsey Blackburn and James Schirillo set out to investigate whether observers have a preference for the left or right side of the face in real-life photographs of individuals.

For the study, participants were asked to rate the pleasantness of both sides of male and female faces on gray-scale photographs. The researchers presented both original photographs and mirror-reversed images, so that an original right-cheek image appeared to be a left-cheek image and vice versa.

Blackburn and Schirillo found a strong preference for left-sided portraits, regardless of whether the pictures were originally taken of the left side, or mirror-reversed. Gender-wise, the left side of the face was rated as more aesthetically pleasing for both male and female posers. Importantly, these aesthetic preferences were also confirmed by measurements of pupil size, a reliable unconscious measurement of interest (pupils dilate in response to more interesting stimuli).

"Our results suggest that posers' left cheeks tend to exhibit a greater intensity of emotion, which observers find more aesthetically pleasing. Our findings provide support for a number of concepts - the notions of lateralized emotion and right hemispheric dominance with the right side of the brain controlling the left side of the face during emotional expression," the researchers conclude.

The findings, appearing in the journal Experimental Brain Research, may also help explain why the majority of artists' portraits present the subjects' left profile.