You are here: Home › Health › Genetics › News › Genes a good predictor of social status
By Will Parker on April 10, 2012 in Genetics, News 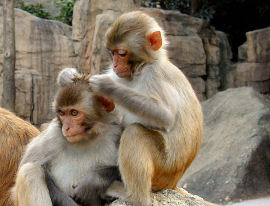 Scientists using an experimental approach to observe how gene expression patterns correlate with social dominance claim that gene expression can predict the social status of an individual with 80 percent accuracy.

The research, detailed in Proceedings of the National Academy of Sciences, is the first to demonstrate a link between social status and genetic regulation in primates on a genome-wide scale. It reveals a strong, plastic link between social environment and biology. The new findings build on previous research that showed how social interactions can alter gene expression in songbirds.

In the new work, researchers from the University of Chicago, Yerkes Primate Research Center and Duke University, discovered significant differences in the expression of genes involved in the immune response in high-ranking rhesus macaque females and their low-ranking companions. The study notes that when a female’s rank improved, her gene expression also changed within a few weeks, suggesting that social forces can rapidly influence genetic regulation. “We were able to use gene expression to classify individuals based on their rank,” said Yoav Gilad, from the University of Chicago. “Demonstrating these very plastic and temporal changes was novel and quite interesting.”

“Our study supports the idea that low social status can be bad for the body. But it hints at the idea that if you improve your social situation, your health improves, too,” added co-researcher Jenny Tung, from Duke University.

The researchers looked at gene regulation in 49 female rhesus macaques kept at the Yerkes National Primate Research Center. The monkeys have a hierarchical rank based on the group in which they live. Males enter new social groups at adolescence to establish their rank order, while females never leave their birth group and take on a rank similar to their mothers’ status.

To examine how gene expression would differ when a monkey’s rank changed, the scientists took the female macaques from their native groups and constructed 10 new social units, where rank was determined based on how early a female was added to her unit. They then took blood samples from the monkeys and isolated the white blood cells. The results show that lower-ranking monkeys had lower levels of a certain kind of T cell and showed signs of exposure to chronic stress.

The researchers also looked for changes in the monkeys’ DNA and found an animal’s rank in dominance correlated with the presence or absence of methyl groups, which help control the switching on and off of genes.

The overall genetic “signature” of expression changes was robust enough that the researchers could predict an individual monkey’s social rank with high accuracy from their gene expression profile alone. That predictive power also enabled an unanticipated second test of whether gene expression would reflect unplanned changes in dominance rank.

“It was a fortunate event in the experiment,” University of Chicago team member Yoav Gilad explained. “When a couple of animals were removed from cages for various reasons and new ones were introduced to the groups, it turned out to improve the rank of a few monkeys. We could take advantage of this switch and see if our classifier still works.”

The researchers found that the females’ immune systems responded rapidly when they moved from a lower social rank to a higher one, to the point where formerly low-ranking animals looked genetically like high-ranking ones.

“There’s a spooky side to this kind of research, in that an individual’s social rank is partially determining health status. We’re seeing that there are a lot of effects of social status on genes, including our own, but we are also seeing that many of the changes aren’t permanent and that leads to more questions,” Tung mused. “This study is just the tip of the iceberg when it comes to understanding the relationship between genomics and social environments.”

Regulation of Pattern of Gene Expression by Controlling Elements in Maize by M..

Teratological Correlations and the Mechanism of Gene Expression by Landauere, ..

II. The Role of the Nucleus: Genetic Systems Regulating Gene Expression during..

Polycomblike: A Gene that Appears to be Required for the Normal Expression of ..