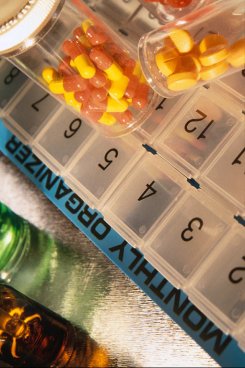 When Dr. Charles Bradley administered Benzedrine to a group of children with hyperactivity in 1937 a new era of psychopharmacology was born. His observation that "fourteen children responded in a spectacular fashion" ushered in the widespread use of methamphetamine-like drugs to treat hyperactivity and learning disorders. But for more than seven decades scientists have not understood how these stimulants actually work to control hyperactivity.

Now, a researcher at SUNY Downstate Medical Center, working with colleagues in Mexico, has identified the probable mechanism by which stimulants accomplish this paradoxical reduction of motor activity. The findings appear in the journal Neuropharmacology.

SUNY's David Erlij says his team have identified a network of nerve terminals where stimulation of dopamine D4 receptors depresses motor activity. "This network is localized deep in the brain, in the basal ganglia and the thalamus and its responses explain the reduction in motor activity caused by psychostimulants," said Erlij. "Our results suggest that enhancing dopamine D4 transmission in the basal ganglia and the thalamus is likely part of the mechanism of the therapeutic effects of psychostimulants on ADHD."

Interestingly, the therapeutic action of psychostimulants in ADHD suggests that the condition is caused by abnormalities of dopamine signaling in the brain, and that, in ADHD patients, the dopamine D4 receptor gene is abnormal. "Now that we know with some precision where calming of hyperactivity is likely taking place in the brain, it may be possible to develop new and better treatment modalities," Erlij concluded.