You are here: Home › Environment › News › Wireless charging proposed for electric cars
By Will Parker on February 2, 2012 in Environment, News 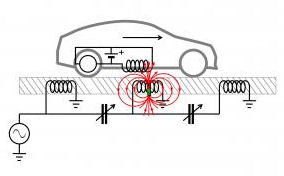 According to the researchers, their charge-as-you-drive system would overcome one of the major limitations of electric vehicles – limited range. “What makes this concept exciting is that you could potentially drive for an unlimited amount of time without having to recharge,” said study co-author Richard Sassoon. “You could actually have more energy stored in your battery at the end of your trip than you started with.”

The Stanford research, published in Applied Physics Letters, builds on previous research at MIT that detailed a stationary charging system capable of wirelessly transferring about 3 kilowatts of electric power to a vehicle parked in a garage or on the street. The Stanford researchers wondered if the MIT system could be modified to transfer 10 kilowatts of electric power over a distance of 6.5 feet – enough to charge a car moving at highway speeds. Using computer models, they found the answer: a coil bent at a 90-degree angle and attached to a metal plate can transfer 10 kilowatts of electrical energy to an identical coil 6.5 feet away. “This wireless transfer scheme has an efficiency of 97 percent,” boasted Stanford’s Shanhui Fan.

Fan says the next step is to test it in the laboratory and eventually try it out in real driving conditions. The researchers also want to make sure that the system won’t affect drivers, passengers or the dozens of microcomputers that control steering, navigation, air conditioning and other vehicle operations.

The wireless charging system would also offer the possibility of an automated highway system with driverless electric vehicles, which the researchers say would reduce accidents and dramatically improve the flow of traffic. “The magnetic fields could also be used to control steering,” they note. “Since the coils would be in the center of the lane, they could provide very precise positioning at no extra cost.”