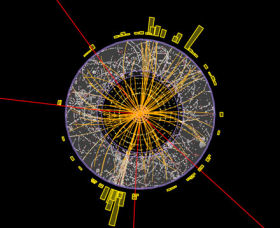 The Higgs boson, the elusive so-called "God particle" that gives other particles mass, is still proving to be elusive, with the release yesterday of nebulous findings from the Large Hadron Collider (LHC) that physicists say "hint" at the elemental particle's existence. Finding the predicted Higgs particle would complete the standard model of particle physics that describes the fundamental building blocks of matter and their interactions.

Since the LHC came stutteringly online in 2009, physicists have been combing through the debris of billions of proton collisions to identify the tell-tale signs of Higgs' existence. Yesterday, scientists working with the ATLAS and CMS detectors at the LHC announced jointly that they had seen indicators of the Higgs' mass within the range of 124 - 126 gigaelectronvolts (GeV). Specifically, 115 - 130 GeV reported by the ATLAS detector, and 117 - 127 GeV reported by the CMS detector. It is believed that the Higgs is a very short-lived particle, quickly decaying into other more stable particles. There are several different decay possibilities, so the two detectors employ different techniques to sniff out the mysterious boson, hence the differing (but ballpark) figures.

The official word from CERN (who operate the LHC) is that while tantalizing hints have been seen by both experiments in this mass region, they are not yet statistically strong enough to claim a discovery. "We have restricted the most likely mass region for the Higgs boson to 116-130 GeV, and over the last few weeks we have started to see an intriguing excess of events in the mass range around 125 GeV," explained ATLAS spokesperson Fabiola Gianotti. "This excess may be due to a fluctuation, but it could also be something more interesting. We cannot conclude anything at this stage. We need more study and more data."

Gianotti's caution is understandable, because at present, the physicists don't have enough confidence in the validity of the findings. "Such signals can come and go... Although there is correspondence between the two experiments, we need more solid numbers," CERN's Rolf-Dieter Heuer told the BBC.

The lack of confidence arises because there have only been a handful of Higgs' hints observed out of billions of collisions. Heuer admits that none of the tell-tales are at much more than a two sigma level of certainty. The sigma number provides an indication of how unlikely it is that an experimental result is simply down to chance rather than a real effect. For a particle physics observation to be generally accepted, a five-sigma level of certainty is required.