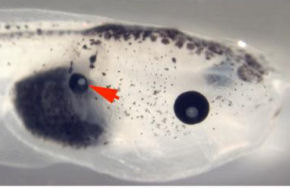 The research, appearing in the journal Development, is based on the hypothesis that for every structure in the body there is a specific cellular membrane voltage range that drives organogenesis. To grow eyes outside of the head area, the researchers changed the voltage gradient of cells in the tadpoles' back and tail to match that of normal eye cells. The eye-specific gradient drove the cells in the back and tail - which would normally develop into other organs - to develop into eyes.

"These results reveal a new regulator of eye formation during development, and suggest novel approaches for the detection and repair of birth defects affecting the visual system. Aside from the regenerative medicine applications of this new technique for eyes, this is a first step to cracking the bioelectric code," explained researcher Vaibhav P. Pai.

Following from that, the biologists were also able to show that they could control the incidence of eyes by manipulating the voltage gradient in the embryo. "Abnormalities were proportional to the extent of disruptive depolarization," said Pai. "We developed techniques to raise or lower voltage potential to control gene expression."

Pai added that the most surprising results were achieved when the team manipulated membrane voltage of cells in the tadpole's back and tail, well outside of where the eyes could normally form. "By using a specific membrane voltage, we were able to generate normal eyes in regions that were never thought to be able to form eyes. This suggests that cells from anywhere in the body can be driven to form an eye."