The Kepler space telescope has identified a large, rocky exoplanet with a surface temperature of about 22 degrees Celsius (72 degrees F, comparable to a comfortable spring day on Earth). The discovery represents the first detection of a possibly habitable world in orbit around a star much like our own Sun. The team behind the discovery, led by William Borucki of the NASA Ames Research Center, report their findings in theAstrophysical Journal. 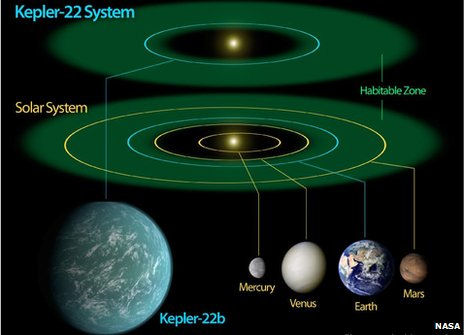 The planet – known as Kepler 22-b – and its host star lie about 600 light-years distant, toward the constellations of Lyra and Cygnus. The star has a mass and a radius slightly smaller than that of our Sun which makes it about 25 percent less luminous than the Sun. Kepler 22-b orbits the star with a period of 290 days, compared to 365 days for the Earth, at a distance about 15 percent closer to its star than the Earth from the Sun. This creates the planet’s balmy temperature.

Borucki said the planet orbits in the middle of the star’s habitable zone, where liquid water could exist on the surface. Liquid water is necessary for life as we know it, and the researchers speculate that this new planet may harbor life.

“This discovery supports the growing belief that we live in a universe crowded with life,” Borucki said. “[The] Kepler [space telescope] is on the verge of determining the actualabundance of habitable, Earth-like planet in our galaxy”.

Related:
Discuss this article in our forum
SETI needs to see the light, say astrophysicists
US astronomers give nod to complex organics in space
Discoverer of alien bacteria says life probably exists “everywhere”
Newly discovered exoplanet may be habitable