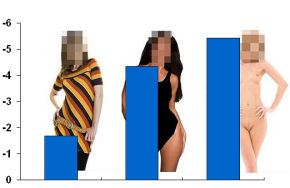 The uniquely human part of the brain that allows us to recognize faces in microseconds is even more sensitive at recognizing another aspect of human bodies - whether they are clothed or naked.

In the study, male and female subjects were shown pictures of men and women in which the models wore either everyday clothes, swimsuits, or were nude. At the same time, visual cortex responses were recorded from the participants' electrical brain activity. This method allowed the researchers to investigate the primary stages of visual information processing.

The results indicate that the brain "boosts" - at a very early stage - the processing of sexually arousing signals. The researchers, reporting their findings in PLoS ONE, suggest that this priority processing of nakedness may assist in efficient perception of potential mating partners - and mating competitors - in the environment.