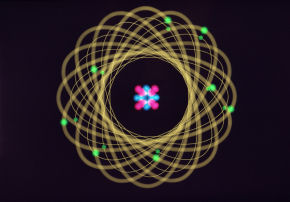 Electromagnetism, measured by the so-called fine-structure constant, is one of the four fundamental forces of nature and it underpins Einstein's general theory of relativity. The constant, denoted by the symbol alpha, should be the same across the cosmos, but an Australian physicist's observations of distant galaxies indicate that it may in fact be variable. The research, by John Webb of the University of New South Wales, appears in Physical Review Letters.

The new work builds on earlier research that also hinted at a constant that may not actually be constant. If confirmed, the findings will deeply impact our understanding of space and time, as the fine structure constant determines the electromagnetic interactions between electrons and atomic nuclei.

Interestingly, the observed drift in alpha may imply a much larger universe and also offer a natural explanation for a question that puzzled scientists for decades: why do the laws of physics seem to be so finely-tuned for the existence of life?

Webb's theory is based on spectral observations from 300 galaxies spread across the observable universe. In one direction he found a smaller value of the fine structure constant at high redshift, in the other direction he found the fine structure constant increases at high redshift. Specifically, Webb said the combined data set fits a spatial dipole, significant at the 4.2� level, in the direction right ascension 17.5�0.9 h, declination -58�9 deg. "It appears to get stronger in one direction and weaker in the other, meaning the universe appears to be dipolar," Webb told ABC science. Webb initially used the Keck telescope for his observations and has since then confirmed the measurements using the Very Large Telescope in Chile.